Cicada-Killer Wasps: Not Out to Get You!

Find this article at:
go.ncsu.edu/readext?885811
— Written By Amanda Wilkins (2 weeks ago) and last updated by Rhonda Gaster

Late summer is an incredible time to see the diversity of insect pollinators that call North Carolina home. Unfortunately, humans, especially those attuned to their homes and gardens, get nervous when they see aggressively-colored wasps or aggressive flying patterns from any insect hovering around their yard. It is fair to want to protect yourself and your family, but most of the time these insects are just looking for their next meal (and it isn’t you!).

The N.C. Cooperative Extension, Lee County Center has seen an uptick in “murder hornet” concerns recently and we want to clear the air. What you are seeing is likely NOT the Giant Asian Hornet (GAH), Vespa mandarinia, but our Eastern North American native Cicada Killer, Sphecius speciosus (Or one of the many native wasps that live in NC!).

Cicada killers are solitary wasps that burrow in sandy, well-draining, bare soil in full sun areas near trees. Here in Lee County we have an abundance of such areas! If you don’t see the insects themselves, you might notice a large half-inch hole surrounded by a half-moon of dug soil. While the insects themselves are solitary, they can sometimes concentrate their burrows in close proximity to each other. The uptick in reports of these wasps recently has possibly been in response to recent land clearing that has caused hornets to have to find new nesting sites closer to stable human habitation.

The female wasps, which are larger, construct the nest cavities that can sometimes stretch as deep as ten inches and almost a foot long. The males are usually seen 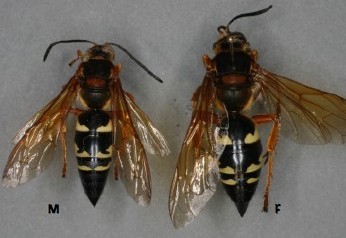 outside of their burrows on patrol for females that need to be mated with or to ward nosey animals away from the burrows. It is a show though, as they have no stinger! The female wasps do have a stinger, which they use to stun cicadas so they can carry them back to their nests and feed them to their young. The only time a human or pet is in danger is if they try to handle the insects.

Not the “murder hornet”

The Giant Asian Hornet is longer than the cicada killer by a quarter to half an inch, and the coloration across the insect is different. The GAH has a broad, completely yellow head and the eyes are more on the front of the face, while the cicada killer’s eyes are outward facing and the face is mostly black. The coloration on the abdomen (sometimes known as the “butt” to layfolks) is different too: GAH has consistent yellow and black bands all the way down, whereas the cicada killer has two to three hooked yellow bands on a mostly black abdomen.

Do you need to do anything?

Most people seem to want to reach for the “wasp spray” when they see anything with aggressive coloration or behavior. Scientists always advise temperance before action, and use a concept called “economic threshold.” It is the idea that there is a certain level of tolerance for a certain pest behavior before it becomes economically cost-effective to act. Most of the time cicada killers do not need any control, unless there is a large number of burrows that are negatively affecting patio or construction areas. These gentle giants are good at finding an ideal location, and if their human neighbors can tolerate their presence they can be beneficial insect neighbors. If you think control is necessary, please reach out to the N.C. Cooperative Extension, Lee County Center and we can advise you on treatment options.

It’s a Murder Hornet or is It?

University of Kentucky on Cicada Killers