Be Wary of European Hornet

Find this article at:
go.ncsu.edu/readext?873643
— Written By Bill Stone (1 month ago) and last updated by Rhonda Gaster

As the days of summer return, many of our flying insects are noticeably increasing their activity in the landscape. Wasps and hornets are beginning to forage food for their young and collect materials for their nests, this includes the European hornet.

The European hornet (Vespa crabro L.) was introduced into the New York area in the mid 1800’s and has since spread throughout the eastern United States. It is 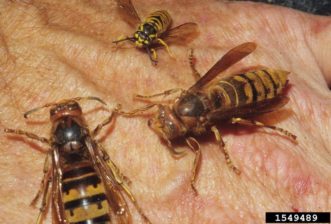 often confused with the bald-faced hornet which is black with white markings. The European hornet is quite large, up to an inch and 1/2 in length. It has a yellow face with black eyes and yellow stripes, like a yellow-jacket on steroids, and has black spots on the end of its body. It can also be confused with the ‘Japanese’ or Asian giant hornet. The Asian giant hornet, often referred to as the ‘murder’ hornet, has only been found in Washington state and Canada and has not been identified in North Carolina.

Nests of the European hornet can be found in hollow trees, in barns and sheds, in attics and in wall voids in houses. They rarely build nests that hang freely or are in unprotected areas. The nest is usually built at the opening instead of deep within the structure. Inside the nest are multiple layers of hexagonal combs similar to honey bee combs. Exposed parts of the nest are covered with a paper-like substance to seal the area.

In spring, queens emerge from overwintering hibernation and seek out nest building sites. They construct the nest and begin to lay eggs and collect food to feed the young. After they produce enough workers to take over the maintenance of the colony, they continue to produce more offspring. The workers (all of which are females) forage for food and expand and defend the nest. That figures, doesn’t it? As the nest increases, new queens and males are produced in mid to late summer. They leave the nest, mate and the new queens find suitable sites to overwinter until the following spring. Nests can be active into late fall. The original queens and workers die by early winter. Abandoned nests are not usually reused the following year.

European hornets are active both day and night. They are attracted to light and can often be heard beating against window panes or observed flying around porch lights at night. They are generally less defensive than yellow jackets or bald-faced hornets, but will defend their nests if threatened. There is less of a chance of being stung multiple times, but they will become aggressive if they are provoked and the sting is very painful. If controls are necessary, commercial insecticides labeled for wasps and hornets can be useful. The best time to treat the nest is early in the day before sunrise. Aerosol sprays with a long stream will enable you to add some distance from the nest while applying. Wear protective clothing and avoid standing near a light source. Several treatments may be necessary or you may need to contact a professional pest control company, especially if the nest is located inside. For more information, view our publication on European Hornets.

Summer is here with plenty of sunshine, long days and warm nights. We should appreciate the beauty of the landscape and all that awaits us in the great outdoors. But we need to be aware of nesting activity when it is nearby and try to avoid stings from wasps or hornets. That can ruin a perfectly wonderful day.