Find this article at:
go.ncsu.edu/readext?866424
— Written By Bill Stone (1 month ago) and last updated by Rhonda Gaster

One of the earliest, and most recognized spring-blooming trees is the ornamental pear commonly referred to as ‘Bradford’ pear. It is from the species of Callery pear (Pyrus Calleryana) that originated in China and is one of its oldest cultivars. ‘Bradford’ pear was introduced into our landscape in the early 1960s as a temporary (10-20 year) specimen tree in residential and commercial sites, school grounds and shopping malls. It was planted because of its desirable shape, rapid growth rate and its adaptability to different soil conditions. It is relatively disease and pest free, but alongside that which is normally considered good news, also comes some bad.

The ‘Bradford’ pear is not able to bear fruit that is viable due to its sterile nature. However, cultivars that were later developed were able to cross-pollinate with this 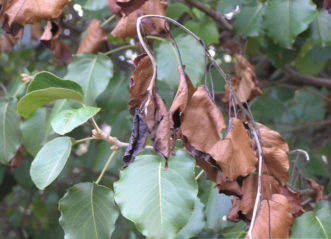 selection and produce viable offspring which escaped to roadsides and fencerows. These offspring bear long, sharp thorns and have spread into natural forests, replacing native trees due to their rapid growth and the overabundance of ‘Bradford’ pears that were planted.

The disease known as fire blight affects members of the Rosaceae (rose) family including apple, pear, crabapple, pyracantha, photinia, quince, loquat and hawthorn. The bacteria enters through flower blossoms or wounds in the tree and is more conducive during cool, wet springs. Flowers turn black and die as the disease moves down branches and causes young twigs to blacken and curl over, resulting in the telltale “shepherd’s hook”. Leaves wilt and blacken but remain attached, giving the plant a fire-scorched appearance. Insects and rain can spread the disease. Although ‘Bradford’ pear has considerable resistance, its cross-pollination with cultivars has resulted in self-sustained populations of wild callery pear trees that can spread the disease to apple and pear orchards and into home landscapes. Susceptible varieties have substantially more damage.

Cedar quince rust is also a disease of ornamental pear that alternates between the Rosaceae family and the Juniperus (juniper) family. In cool, wet springs, the fungal pathogen spreads by spores from nearby infected junipers, like the Eastern red cedar, to plants such as pear, hawthorn and serviceberry. Tiny bright orange surface bumps appear on leaves and blooms leaving damage that appears similar to fire blight but generally affects only the branch tips. It may significantly reduce seed production, but does not move throughout the tree. There are no recommended controls for fire blight or cedar quince rust on ‘Bradford’ pear. For more information, read our article on the fire blight.

‘Bradford’ pears are structurally weak trees. Their narrow crotch angles make them highly susceptible to breakage by wind and ice. Their thousands of blossoms at peak have a smell that is described as that of “a decaying animal”. They are now considered a noxious invasive species, so much in fact that there is a bounty program that has been implemented in North Carolina to help with the replacement of ‘Bradford’ pear with native trees. For details, check out our article on the ‘Bradford’ pear bounty. Alternatives to planting ‘Bradford’ pear include flowering dogwood, kousa dogwood, fringe tree and Carolina silverbell.

‘Bradford’ pear once filled a niche in our landscape, but its qualities proved detrimental to what is left of our native woodlands. This once temporary specimen has reached its end time. It is time to say “good-bye”. So long. Farewell  By the way, you stinketh.