Why We Use Apple Rootstock

Find this article at:
go.ncsu.edu/readext?855235
— Written By Bill Stone (2 months ago) and last updated by Rhonda Gaster

If you have strolled past the produce section of your local supermarket or visited one of our independent grocers lately, you most likely have noticed an outstanding number of varieties of apples. Red ones, yellow ones, green ones, pink-striped and in between ones, they are all different in color, size, taste and texture. You know your faves. They’ve been a long time in coming.

It is believed that the apple originated in central Asia and the seeds were carried to places like Europe as people migrated westward, perhaps as early as 1500 BC. When settlers came to the New World, they found wild fruits such as grapes, berries and persimmons, but no apples. By the 1600’s, tens of millions of apple seeds, mostly brought from Europe, were planted in orchards and on farms across the settled parts of the United States. Fruit from seedling trees were usually small and poorly flavored. Most were used for cooking, drying, the making of cider and vinegar and keepers for winter months. Very few were eaten fresh.

Most apple trees require cross pollination from a different variety in order to bear fruit. Flowers contain both male and female parts but are not compatible with their own pollen. Random pollination from bees and other insects results in a seed that, if planted, produces a tree and fruit different from all other trees and fruit. Each is genetically unique. When a seedling tree produces a good apple, it cannot be reproduced by its seed. The late Lee Calhoun, historian and collector of heirloom apples, noted in his book ‘Old Southern Apples’, “It is estimated that modern plant breeders get only one in ten thousand apple seeds to grow into a tree with fruit worthy of further consideration.”

In older times, digging up and replanting root sprouts of an exceptional tree was the most accepted method of propagation. By the early 1700’s, grafting, a much faster way to reproduce select varieties, became more widespread. Grafting is the process of cutting a twig from a desired variety and fusing it with the severed trunk of a young apple tree. As a result, trees would bear fruit identical to the original tree.

Grafted trees can be identified by two main parts. The scion is most of what you see above ground, this is the fruiting part. It provides the fruit, size, color and quality. The rootstock contains the lower trunk and the roots and determines the size of the tree. The union is usually denoted by a kink in the trunk. Through research and breeding, certain rootstocks can provide some disease resistance, cold hardiness and precocity (the ability to induce fruitfulness at an earlier stage). 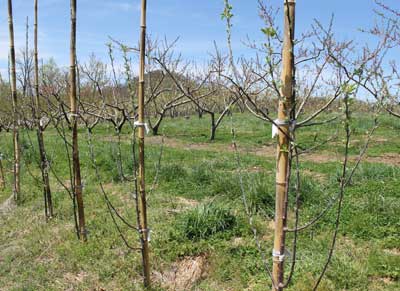 They can also enable trees to grow in less than ideal conditions such as drier climates and heavier  soils. Rootstocks can range from the standard (seedling) to semi-standard, semi-dwarf and dwarf. Most originated in Europe. Standard rootstocks produce the largest trees, some up to twenty feet tall, while trees from dwarf rootstock may be only 35% of the height of a standard tree. Modern rootstocks are not grown from seed, but are produced from root cuttings. Using dwarf or semi-dwarf rootstocks, commercial growers are able to plant more trees in an acre. Home growers can also benefit from using varieties with smaller rootstock. Trees are easier to train, prune, spray and harvest. They can also bear fruit earlier and produce higher yields. For more information on apple rootstock, go to
content.ces.ncsu.edu/north-carolina-production-guide-for-small-orchard-plantings,
or extension.psu.edu/apple-rootstocks-capabilities-and-limitations.

Research continues on more disease resistant rootstock while breeders and pomologists (yes, it is a real word) experiment on new apple varieties to entice us. So, the next time you take a bite of that Fuji or Honeycrisp, take a moment to savor and appreciate them. They have been a long time in coming.