Don’t Honey Me You Fungus

Find this article at:
go.ncsu.edu/readext?819116
— Written By Minda Daughtry (3 weeks ago) and last updated by Rhonda Gaster

Armillaria Root Rot has a few different common names, besides the Honey Fungus you may hear it called white rot fungus, shoestring root rot, or Oak Root Fungus. It is a disease that decays the root system of many common trees and shrubs, and as is often the case of “one size does not fit all” – there are several species of the pathogen. Although clusters of yellow to honey-colored (hence one of the names) mushrooms appear during moist conditions the timing of this fruiting body doesn’t always lend itself to being spotted. Mushrooms don’t linger all that long.

The disease is often lethal and infected trees may have wilting branches, dieback, and stunted growth. It can affect deciduous as well as coniferous trees and shrubs from the forest, to the orchard to the garden and it’s found throughout temperate 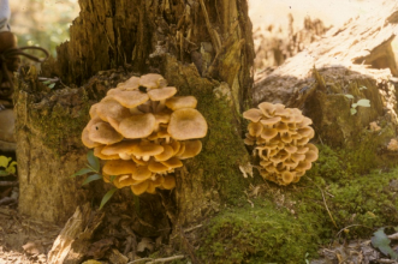 and tropical regions around the globe. The fungus can take off in roots and the root crown before any symptoms are detected above ground. Infected trees usually die early on, and young trees often die quickly after infection. Mature trees may die quickly or slowly, or may even temporarily recover a bit if conditions become good for tree growth and poor for disease development. This fungus perseveres in roots, stumps, and wood fragments in the soil and so can infect new plantings at that site, even spreading to nearby plants depending on what wood material is underground. Some mature trees can have extensive root systems far beyond the trunk so host material underground may reach farther than you expect.

Diagnostic characteristics appear at decayed areas in the bark, at the root collar, and 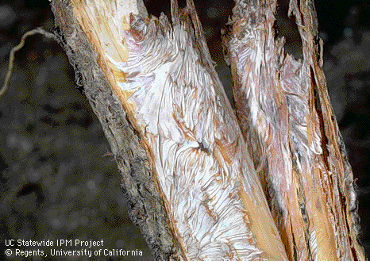 on the roots. White mycelial (a network of fungal threads or hyphae) fans form between the bark and wood. Because these fungi commonly inhabit roots, spotting them is challenging unless characteristic “honey mushrooms” appear around the base of the tree when you are present to notice them or symptoms become obvious in the crown or on the lower stem.

There are quite a few root rot diseases and the symptoms of decline of the tree or shrub are similar to those. The most common symptoms are stunted growth, yellowish leaves, dieback of twigs and branches, and gradual or sudden death of the tree. At first, the infected trees are scattered but due to the spread of the fungus from its primary infection point, circular areas of diseased trees appear as their roots grow into areas where infected root material exists.

If your tree or shrub exhibits these types of symptoms, especially at or near the crown, examine that area closely. If Armillaria fungus is there removing the bark in that area covering infections will expose the characteristic, white mycelial mats or the rhizomorphs that grow between the wood and the bark. The white mycelial mats are marked by irregular, fanlike striations; hence,  they are often referred to as mycelial “fans.” Trees and roots weakened from other causes are much more easily attacked by Armillaria than are vigorous trees.

To read more about this fungus and see images of what it looks like on various trees and shrubs, take a look at this edition of NC State Extension’s North Carolina Pest News Volume 26, Number 20, August 26, 2011.