The Dog-Day Cicadas of Summer Are Back, and With More Friends This Year

Find this article at:
go.ncsu.edu/readext?704433
— Written By Minda Daughtry (2 weeks ago) and last updated by Rhonda Gaster

Summer is officially here! Along with lemonade, watermelons, beaches, and barbeques we enjoy during these hot months of the year, cicadas provide a rhythmic soundtrack for summer days here in North Carolina.

Cicadas are quite charismatic insects. They were featured in 2015 at BugFest, an annual event hosted by the North Carolina Museum of Natural Sciences in downtown Raleigh which celebrates insects and their relatives. The entire day was dedicated to learning more about this charming group of insects who show up only for a brief time each year.

Cicadas Soar Their Way Into Bugfest 2015

Like many other insects, cicadas spend most of their lives underground as immatures or nymphs. When they emerge from the soil and become adults, they are only here to stay for a few months. Annual cicadas (also called “dog-day cicadas”) typically emerge during July and August to sing, mate, and lay eggs in plant stems. A few months later, nymphs will hatch from these eggs and burrow into the ground, where they will live for the next 2 years. They will continue the cycle their parents started in the summer, emerging from the ground to become adults and to give rise to the next generation of cicadas.

With different species come different sounds. 20 species of cicadas are found in NC, and only the males sing. They use specialized-sound organs, called tymbals, which they vibrate at high frequencies to create their distinct songs. Some male cicadas even sound like table saws. If you are working outside in your shop, you might find some curious female cicadas as visitors!

Listen to the songs of different cicadas species, some of which can be found in NC.

What are periodical cicadas?

This year some of us will get to see a special group of cicadas, known as periodical cicadas, join the annual species in providing the summer sounds for our communities. These cicadas (Magicicada spp.) appear only every 13 or 17 years, and in large numbers! As David Attenborough states in his special on 17-year periodical cicadas on BBC Earth, these insects perform “the biggest insect emergence on the planet…” 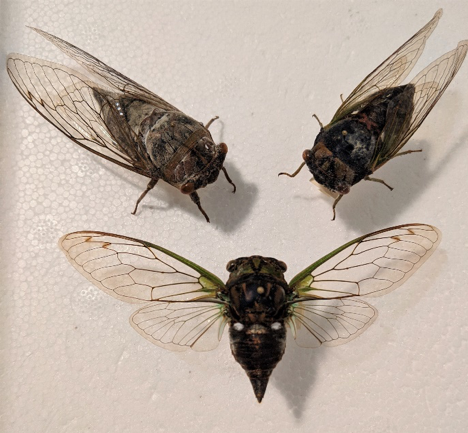 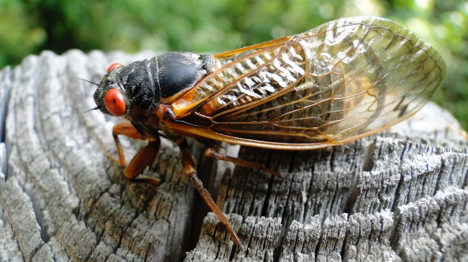 In 2020, Brood IX will be emerging in northwest NC as well as Virginia and West Virginia. This brood includes three species, all of which emerge every 17 years: Magicicada septendecim, Magicicada cassini, and Magicicada septendecula. Based on the mapping data for tracking this brood, these species will likely not be present in Lee County. However, Brood XIX, which includes several 13-year species, is emerging 4 years early in many locations around our state! You can see where Broods IX and XIX are emerging here:

Are cicadas pests? What do they eat?

Cicada adults and nymphs have sap-sucking mouthparts which allow them to feed on plant tissues. Nymphs feed on tree roots while living underground, yet this causes no evident damage to trees. Neotibicen species of annual cicadas feed on deciduous hardwoods, such as oak, maple, elm, ash, beech, walnut, persimmon, and peach. They have also been found to deposit eggs within stems of sumac, asters, goldenrod, and willow shrubs.

Neither annual nor periodic cicadas pose a significant threat to orchards or nurseries, except during years close to when large periodical emergences are predicted to occur. During these years, it is best to avoid planting young trees, which can be damaged or killed by the large number of females laying eggs. Females will create cuts in tree limbs to lay eggs and give their nymphs access to plant fluids to feed on after hatching. These scars can cause flagging, a condition when twigs become severed and leaves turn brown. Netting with a ¼ inch mesh or finer can be used to block cicadas from accessing young trees during these years. Since most years only annual cicadas are present, and their smaller numbers do not significantly impact trees, pesticides are not recommended to control cicadas. 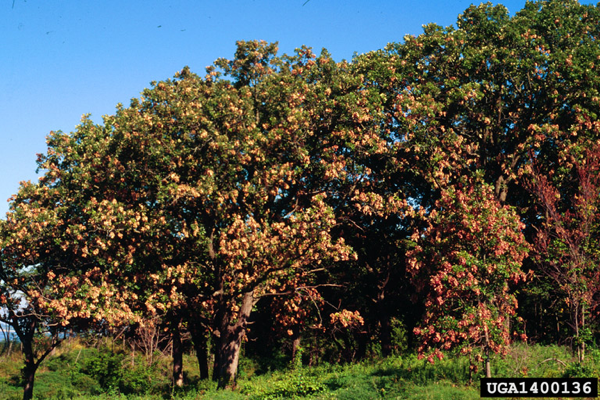 Want to know if periodical cicadas are coming out in your area? You can use the websites below to track the emergence of the different broods. Enjoy the cicadas’ music this summer!