— Written By Matt Jones and last updated by Rhonda Gaster

Rose rosette is a viral disease that has been increasingly common on many rose species and cultivars in North America. The disease causes growth distortions, resulting in a range symptoms that may include: rapid shoot elongation, ‘witches broom’ growth pattern (tight clustering of leaves and small stems around a parent stem), deformed leaves deep red in color, malformed flowers, canes that produce no flowers, unusually thick or succulent stems, and lack of winter hardiness. The most recognizable symptom is a proliferation of thorns, found on stems in much greater density than normal. These numerous thorns are often succulent and more pliable than normal thorns, and may appear red or green in color.

The disease is caused by a virus that is spread by tiny arachnids called eriophyid mites which, at 1/200th of an inch long, are tiny even by mite standards, and are light enough to be carried from plant to plant by the wind. The mites feed off plant sap in young stems, transmitting viral particles in the process. Humans can also 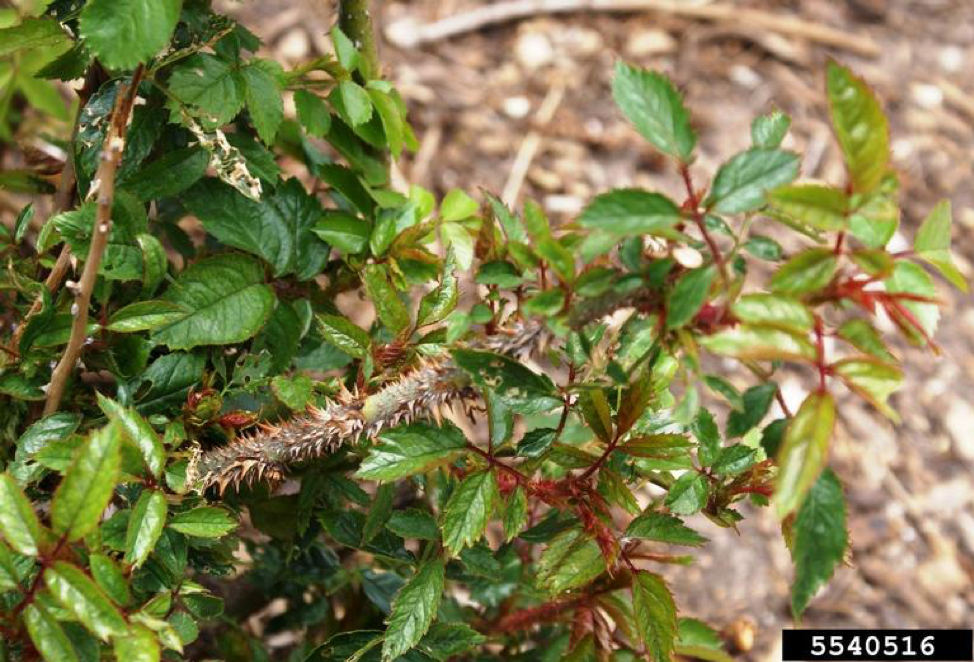 transmit the virus by contaminated pruners and through grafting infected material. The virus moves through the entire plant quickly, so pruning off only the symptomatic tissue will not help. Like all viral infections, there is no cure for infected plants, and most roses will succumb to the disease in several years.

In principle, controlling the vector could inhibit the spread of the disease, but there are currently no effective miticide or insecticide treatments for controlling eriophyid mites: application of insecticides would only harm beneficial insects. If you observe symptoms of rose rosette disease, the best control strategy is simply to remove the infected plant(s) from your yard. Bag the infected plants and dispose of them, or burn them if burning is permitted in your area. As long as infected roses remain in your landscape, they can be a source of inoculum for future infections.

The wild multiflora rose (Rosa multiflora), which was brought in from Japan for breeding ornamental rose rootstocks, is particularly sensitive to rose rosette disease. Muiltflora rose was once widely planted for erosion control and for hedging, but has now become invasive in much of North America and may be a source of inoculum for the rose rosette virus. Multiflora rose can be removed from your property, but make sure it is not the similar, native Carolina rose (Rosa carolina), which is an important pollen and food source for native wildlife.

All ornamental roses are susceptible to rose rosette disease, including the popular Knock Out® cultivars. Research in breeding resistant varieties is ongoing. Fortunately, the virus only seems to infect ornamental roses, so you may plant many other shrub species in your former rose bed should you have an infestation.

If you think some of your roses have rose rosette disease, send a photo to your local N.C. Cooperative Extension horticulture agent. For more information, visit the Rose Rosette website.