Find this article at:
go.ncsu.edu/readext?475831
— Written By Minda Daughtry and last updated by Rhonda Gaster

The Commerce Department of the Federal Government provides weather data through NOAA, the National Oceanic and Atmospheric Administration, and the National Weather Service. Weather affects every aspect of human endeavor, especially commerce, nationally and internationally. Transportation, food supplies, international trade, and health are all affected by weather. So, while the Commerce Department might seem an odd place to house scientific weather agencies, businesses must plan for weather just as much as farmers and gardeners.

We have been hearing references in weather reports about “La Niña” having an impact on weather in many places. So, what is La Niña? According to NOAA, La Niña is the cooler half of ENSO – El Niño Southern Oscillation, a weather pattern that impacts temperature and precipitation all over the globe. It describes the oscillation of warmer and cooler waters across the equatorial Pacific Ocean. Trade winds are equatorial winds going from east to west. In the Pacific, the winds go from roughly Peru to Indonesia affecting and affected by the ocean currents. During La Niña these winds increase in strength pushing the ocean westward and moving surface waters toward Indonesia actually causing ocean levels to rise there. At the same time, the water level is lower in the eastern Pacific. The lower levels in the eastern Pacific allow the cooler sub-surface waters to rise reducing the surface water temperatures in the eastern Pacific. The Pacific jet stream which comes out of Japan heading east is pushed northward toward the Pacific Northwest in contrast to a neutral ENSO or El Niño event. In addition, warmer air rises more in the central Pacific causing a high pressure to settle in the Gulf of Alaska. The high pressure moves the polar jet stream around it, leaving cooler air over western Canada, the north central plains, and the Northeast. At the same time, that polar jet stream blocks storms coming from the Pacific resulting in wetter winters in the Pacific Northwest. A high pressure mass forms over the southeast causing the jet stream to slide south west across the central US and then turn north. This keeps more precipitation in the northeast while leaving the southern half of the US with a drier, warmer air mass. Bottom line, the Northwest and Northeast have wetter weather while the Southeast can experience drought-like conditions.

Another impact of La Niña is to increase hurricane activity in the north Atlantic because the strong trade winds reduce the wind shear over the sub-tropical Atlantic where the hurricanes form off Africa. This may have had an impact on the formation of hurricanes this fall which brought us 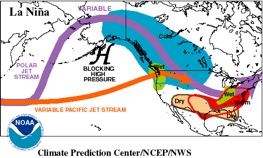 Matthew. These events cause billions of dollars of losses to property and agriculture. North Carolina lost much of its sweet potato crop in addition to huge losses of poultry and pork in the flooded counties. NOAA is increasing its resources to gather data to provide more accurate forecasts for farmers.

This winter we experienced the impacts of La Niña. The temperatures have been warmer than normal while, since Hurricane Matthew, the precipitation has been below normal. NOAA announced the end of La Niña February 9th of this year. Vestiges of La Niña remain and will dissipate over the coming months, but there is not enough data to announce a return to El Niño. So, this spring we will be facing an ENSO neutral pattern. Temperatures and precipitation could remain typical of our normal weather patterns. However, there are also signs that the waters could warm in the eastern Pacific bringing another El Niño. NOAA provides regular updates to weather patterns at www.Climate.gov, so stay tuned. Another resource is the State Climate office of North Carolina, where you can obtain short-term forecasts and learn of drought conditions.

Whether we remain in an ENSO neutral pattern or return to El Niño or La Niña, the temperatures are rising and a prudent approach to gardening this spring is to focus on drought tolerant plants, adding organic matter to soil, and extra mulch around plants to conserve water. There are other weather patterns which interact with ENSO and alter the impact of that pattern. We are still learning how these affect our local weather and the ability of our local farmers to plan for the best use of their resources.

There are amazing resources to learn more about the weather patterns affecting our weather here that are designed to benefit the agriculture industry as well as the home gardener. Here are some resources which may help to explain these patterns.