Find this article at:
go.ncsu.edu/readext?862734
— Written By Bill Stone and last updated by Rhonda Gaster

Do you have a rose that’s been looking a little peekid lately? For those unfamiliar with the term, peekid means poorly or sickly. If you have noticed some considerable changes in the plant’s growth habits, you may want to take a closer look. Rose rosette is a viral disease of ornamental roses and its spread has threatened a variety of rose species. It has put fear in the hearts of rose lovers near and far.

Rose rosette was first detected in western sections of the United States and Canada in the l940s and has been advancing eastward since. It has been most prevalent in the Carolinas within the last decade or so. Its pathogen is a virus spread through populations of roses planted throughout the U.S. Rosa multiflora were imported from Japan for use as rootstock for roses and were once planted along roadsides for erosion control. It is now considered an invasive species and can be found in the wild in fields, meadows and in dense thickets at the edge of forests. Spread of this disease has increased by the Eriophyid mite, a tiny microscopic arachnid that feeds off the plant sap in young stems, transmitting the virus throughout the plant. Caught by wind currents, the mite can travel from plant to plant. The disease can also be spread in the process of grafting and pruning. Unknowingly infested plants can be introduced into the landscape.

Symptoms of rose rosette are most evident in spring as new growth begins to appear and increase as the growing season progresses. They will vary depending on the species or cultivar. Suspect the disease if you have shoots or stems that have an abnormal red color. Stems may become thickened and have a fleshy appearance. There can be an unusual number of thorns that are pliable and 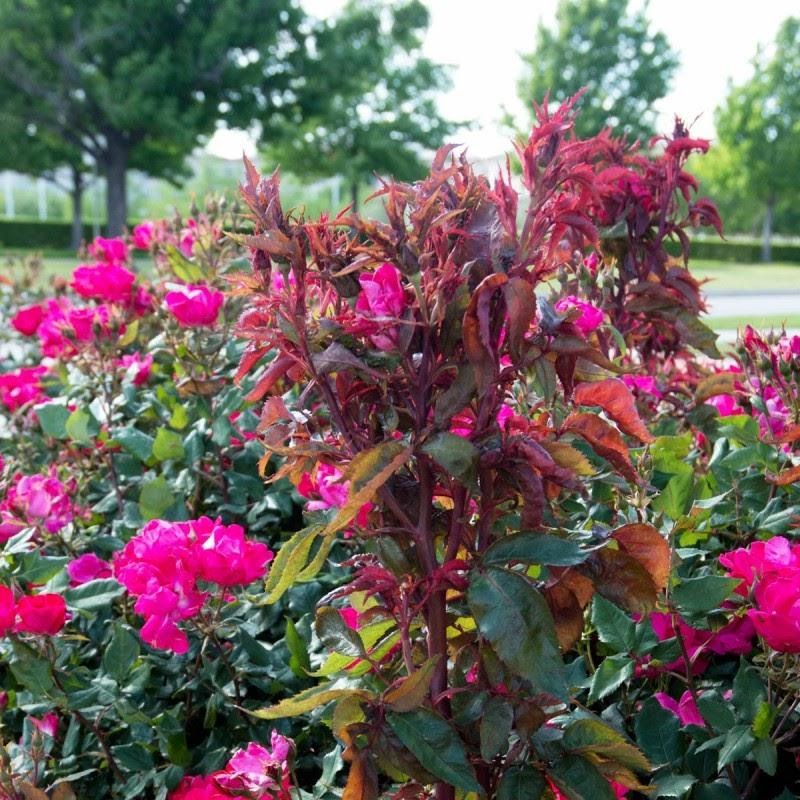 succulent. The plant may have shoots that become rapidly elongated. New growth will exhibit what is called ‘witches’ broom’ where tight clusters of leaves and stems grow around a parent stem. Leaves, buds and flowers may become distorted or deformed. Some symptoms can be similar to the use of herbicides such as 2,4-D or glyphosate so make sure this is not the case.

Preventative measures for control of rose rosette include purchasing disease-free plants from a reputable garden center. Plant in spaces that are proper for the mature size of the plant with good air circulation. Mass plantings in multiple landscapes of one plant variety make it easy for insects and diseases to spread. Remove any wild multiflora roses from around your property as they may be the source of the virus nearby. Don’t confuse this species with the native Rosa Carolina, which appears to have some resistance and is an important source of nectar for pollinators. Descriptions of both plants can be found in the extension plant toolbox.

Infected plants are not curable. Pesticides are not practical as there are no miticides effective against the Eriophyid mite, and affected parts cannot be pruned out. Disinfect all pruning tools between use of any plants. Remove and bag infected plants and any plant material including roots and shoots that pop up afterward. Do not compost but place in trash for pick up or burn if burning is allowed. The disease will spread to other roses, so it is not recommended to replant with roses in these areas. For more information, please refer to the Clemson factsheet on rose rosette virus.

Research in breeding plant varieties resistant to this disease is ongoing. Hopefully there will be success in the not-too-distant future for lovers of roses everywhere. Meanwhile, keep a watchful eye on any plants that start to look a little peekid.