Find this article at:
go.ncsu.edu/readext?690754
— Written By Minda Daughtry (2 months ago) and last updated by Rhonda Gaster

Spoiler Alert:  Not Every Insect is the Enemy (Beneficial Insects Provide Benefits)

Recently, some news media are reporting  – with the sensational headline of “Murder Hornet” –  that the Asian giant hornet (Vespa mandarinia) has been found in Washington state. While our office has been contacted by folks who are very concerned, some even frightened about this insect, there are a couple of pieces of information that are important to keep in mind according to David R. Tarpy, NC State University Professor and Extension Apiculturist:

For accurate information, please take a look at Asian Giant Hornets and European Hornets, as well as the blog with some excellent photographs by Dr. Matt Bertone, Director and diagnostic entomologist with the NCSU Plant Disease and Insect Clinic.

There are factual reasons to be concerned about insects, but not because of the FEAR (False Expectations Appearing Real) model of sensational headlines. The world has lost more than one quarter of its land-dwelling insects in the past 30 years, according to Dr. Roel van Klink whose research focuses on long-term changes in insect communities and has found a link between insect losses and creeping urbanization, which absorbs land where insects live and eat, and general loss of habitat from removing weeds and flowers “bugs” need.

Insects are valuable parts of our ecosystem. According to Professor Dave Goulson at Sussex University “It should be of huge concern to all of us, for insects are at the heart of every food web, they pollinate the large majority of plant species, keep the soil healthy, recycle nutrients, control pests and much more.” “Love them or loathe them, we humans cannot survive without insects.”

I’m not advocating anyone go high-five a hornet, unless you’re at the Spectrum Center Arena on E. Trade Street in Charlotte, NC and get the chance to show the team some support. But let’s consider that not all insects and other tiny residents in the garden and landscape are our foes. Some are friends that you want to attract, 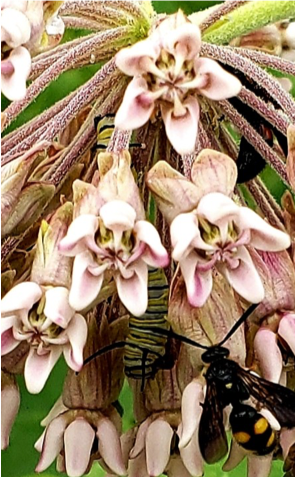 maintain or at least leave alone, so they can do their thing – helping to control the pesky pests. Conservation of beneficials is an important aspect of pest control as part of Integrated Pest Management (IPM) practices, and it’s just kind of cool to have your own personal army.

Beneficial insects come in an assortment of shapes, sizes and functions. With function as the guideline, beneficials can be divided into four basic types: predators, parasitoids, decomposers/recyclers and pollinators. For more detail on these roles and who plays them, take a look at Beneficial Insects.

Remember to “Know before you grow”, learn who your friends are, and plant wisely to provide a happy home for your helpers. Read more about it in the Extension Gardener Handbook and check out some of Debbie Roo’s amazing photographs for helping identify the good guys at Growing Small Farms Beneficials.