Find this article at:
go.ncsu.edu/readext?536047
— Written By Minda Daughtry and last updated by Rhonda Gaster

There has been a lot of talk lately about Giant Hogweed and some folks are feeling a bit harried. So here are some hard facts from the NCDA & CS Plant Industry Division, Plant Protection Section about this plant.

Giant Hogweed (Heracleum mantegazzianum) is a biennial plant in the carrot family that was introduced into the US as an ornamental plant. It is native to Eastern Europe, but escaped cultivation and has now naturalized in areas with rich moist soils (vacant lots, uncultivated or waste areas, riverbanks, along roadways, and in agricultural lands). The plant produces dried fruits which birds eat, thus dispersing the seeds.

Giant Hogweed is a Federal Noxious Weed, as well as a Class “A” North Carolina Noxious Weed, and is found only in Watauga County. It was introduced by a homeowner for soil erosion, and shared with neighbors. The plant was discovered in 2010, and has been found in 6 unique sites around Blowing Rock. The sap of the plant is very dangerous when it gets on your skin or in your eyes, causing blisters and blindness.

To correctly identify this plant, know that it can grow up to 15 feet tall with a taproot or fibrous root. The stems are hollow and 2-4” across with dark reddish purple blotches. The stem has coarse white hairs, that circle the stem at the base of the leaf. The leaves are compound, deeply lobed, with three leaflets, up to 5’ wide. The flower has an umbrella shape up to 2.5 feet across. It blooms in mid to late summer. The fruits are elliptical in shape and produce up to 1500 seeds per flower head. The seeds are viable in the soil for 15 years.

In NC, there are several plants easily confused with Giant Hogweed. The first is native Cow Parsnip (Heracleaum lanatum) which grows in the NC mountains, and can also be poisonous – but is not a Noxious Weed. Elderberry (Sambucus canadensis) also has a white flower and grows rampantly across the state on roadsides. This plant is not dangerous, nor is it a noxious weed. Giant Hogweed also resembles Angelica (Angelica atropurpurea), and Poison Hemlock (Conium maculatum).

Giant hogweed is a threat to natural systems and human health. It is an aggressive plant that can dominate ravines and stream banks due to its size and rapid growth, reducing the amount of suitable habitat for natural plants and wildlife. When it dies off during winter months, increased soil erosion can happen.

Giant hogweed can cause skin reactions when humans come into contact with its sap. The reaction, called Photodermatitis results in large, painful blisters with 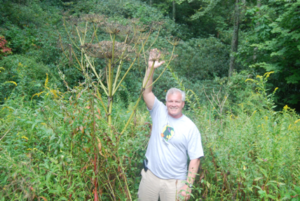 eruptions (worse than poison ivy) within 24-48 hours of exposure. When exposed to sunlight, the blisters leave permanent purple scars. The sap can also result in blindness if exposed to the eyes.

Propagation, nursery cultivation, sale and/or distribution of Giant Hogweed is prohibited. It has been found in Pennsylvania, Maryland, Connecticut, Washington DC, Maine, Massachusetts, Wisconsin, Michigan, NY, Indiana, Illinois, Oregon, Washington and most recently in Virginia. It is also found in Watauga County, NC. Giant Hogweed has been quarantined in this county and plant pest specialists continue efforts to eradicate the population using herbicides, as well as to survey surrounding areas for additional populations.

If you think that you have seen this plant, please contact the NCDA&CS Weed Specialist Dr. Bridget Lassiter (bridget.lassiter@ncagr.gov or (919) 707-3749). You are always invited to report invasive species to the NCDA&CS by calling 1-800-206-9333 or report by email: newpest@ncagr.gov.