Watch Winds and Hit the Sweet Spot to Apply Herbicides

Find this article at:
go.ncsu.edu/readext?526227
— Written By Minda Daughtry and last updated by Rhonda Gaster

Most gardeners and landscapers know that applying pesticides on a windy day is a bad idea. But a complete lack of wind can be an issue, too. It’s important to watch wind speeds and apply when winds are in the ideal range. 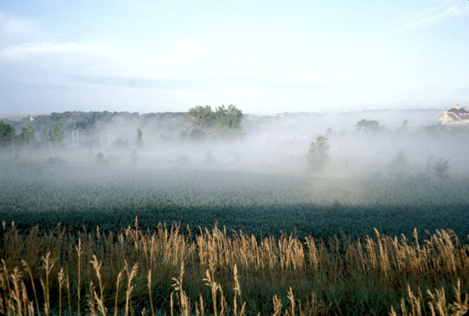 beyond the area of application. It happens when a layer of warm air covers a layer of cooler air. It’s like putting a cap on the surface-level air that stops it from rising and mixing normally into the upper atmosphere.

Gases, including herbicides that have volatilized (turned to gases) trapped near the surface may shift sideways instead. These herbicides and pesticides can move substantial distances in different directions, such as into neighboring properties like lawns, gardens and field crops with destructive results.

Check local weather reports to find out if conditions favor the formation of an inversion. Temperature inversions are most likely when wind speeds are less than 3 mph and/or if the temperature remains within 5 degrees of the nighttime low. A minimum wind speed of 3 mph allows some stirring in the atmosphere to safely dissipate any potential inversion layer.

“Waste not-want not”. In temperature inversion conditions, the spray particles may never hit the intended target weeds. Not only are time, energy and dollars are wasted, but the risk and possible liability of damaging plants in nearby lawns, gardens and field crops is a consideration.

Check conditions before and during every spray application. Check nighttime and current temperatures. Releasing smoke or powder to drift with the wind can show particle movement. If it gathers in a stationary, suspended cloud, that indicates a temperature inversion, which may cause an application to move far and wide. At wind speeds 4-7 mph there will be a light breeze that can be felt on the face and make leaves rustle.

Remember to check the wind and make sure it’s in the proper range — neither strong nor too light. Do not apply any herbicide during a temperature inversion.