Try Pruning to Get Larger Tomatoes

Find this article at:
go.ncsu.edu/readext?529955
— Written By Minda Daughtry and last updated by Rhonda Gaster

Pruning helps to maintain a balance between vegetative and reproductive growth and will encourage more of the plant’s energy to go into fruit production and ripening. If you don’t prune when needed, your tomato plants will produce excessive vegetative growth (leaves and stems) with reduced fruit size. Sufficient pruning will leave your plants with shorter vines and larger fruit that will mature earlier. Pruning combined with staking keeps vines and fruit off the ground, helping to control diseases. Although pruning requires some effort, the benefits of it are more good sized fruit, and easier harvesting.

Start pruning at the bottom of the plant by removing leaves so that the stalk is bare at least 6-12 inches from the ground, depending on the size of the plant. Keep about the top three feet with enough leaves to capture the sunlight and turn it into sugars. With a clean set of pruning shears, simply cut the bottom-most branches away from the main stalk. Pruning will also slow and control the spread of disease because it increases air flow and prevents soil from being splashed up onto the leaves in a heavy rain.

It’s important to know that there are two types of tomatoes:  Determinate (bush) varieties and Indeterminate (vining) varieties. Bush tomato plants grow to about 3’ and then put energy into leaf and fruit production. The fruit will form onto clusters between each leaf and at the end of each stem. For determinate varieties, it may be counter productive to pinch suckers because they will often leaf out, flower, and produce fruit of their own. Some determinate varieties include Celebrity, Better Bush and other beefsteak varieties.

Indeterminate varieties are the tomatoes that can vines several feet long! These tomatoes will ripen fruit early and continually until the first frost and includes most 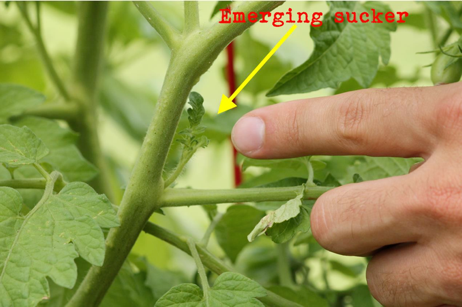 of our cherry and heirloom varieties. For indeterminate varieties, pinching suckers more frequently will prevent the plant from getting too heavy and becoming unmanageable.

The most common method of pruning is to prune to a two-stemmed plant by pinching off lateral branches (suckers) as they develop in the axils of each leaf. To achieve this balance, remove all the suckers up to the one immediately below the first flower cluster. A single pruning will usually be adequate, although a later pruning may be needed to remove suckers growing from the base of the plant.

Suckers should be removed when they’re small, no more than 2 to 4 inches in length, because letting them get large wastes plant energy and provides an entry point for plant pathogens.

Remove and discard pruned branches somewhere away from your tomatoes and clean and disinfect your pruning shears before you prune another plant by dipping them into a dilute 10% solution of bleach water. Prune early in the morning after plants have dried.