Find this article at:
go.ncsu.edu/readext?526220
— Written By Minda Daughtry and last updated by Rhonda Gaster

Fire ants in established turf grass and landscape beds are a serious nuisance pest that interferes with us being able to enjoy the outdoors. When encountered by humans and animals, their stings can cause serious pain and injury. I should have been wearing my gardening gloves and long pants, but I didn’t spot any mounds.

With small colonies, nests can often go undetected until after heavy rainfall when fire ants build up mounds to escape the accumulating groundwater.

As the population grows, they continue to produce mounds, particularly in sunny areas or next to sidewalks driveways and other areas where soil temperatures tend to be higher. The mound serves as a solar collector during daylight by collecting the sun’s energy and storing it as heat and as a heat radiator at night by giving off heat faster than the surrounding soil. We’ve recently had a heavy rain, so I expect to see some new mounds.

Research at Texas A&M University suggests that drenching mounds with a large volume (>2 gal) of hot water (>90°F) or severe mechanical disruption can reduce fire ant activity, however, satellite mounds can form within a few feet of the original mound within a few days. These methods can have useful, but temporary impact on fire ant colonies in areas where a chemical application is not possible. Disturbances associated with the application of insecticides can be sufficient to cause the colony to move. For this reason, it is very important to closely follow label directions.

Home remedies such as applying instant grits, molasses, aspartame or club soda to ant mounds do not work. Pouring chlorine, ammonia, gasoline or diesel fuel on mounds can contaminate the soil and groundwater and is dangerous.

There are a number of biological approaches to fire ant control. One of these is the insect-parasitic fungus Beauveria bassiana. It produces spores that attach to the ant exoskeleton, germinates and grows inside and outside the ant. As with any other insect pest, fire ants spend a great deal of time out searching for food so not all the ants will be immediately available to be come into direct contact with this fungus. One of the best biological control methods for fire ants is to preserve native and exotic ant species that compete with them for food and nesting sites. One way to preserve native ants is the judicious use of insecticides. Not every ant is a fire ant. Some attack or otherwise compete with them.

There are two basic approaches to chemical control of fire ants. An insecticide can be applied to individual mounds (drench, bait) or it can be broadcast (granules, bait) over a larger area infested with fire ant colonies. These applications are most effective when fire ants become active in late spring and early fall when air temperatures are between 70-95°F.

The potato chip (the greasy kind, not the baked ones) test is a good indicator to check for foraging activity. Scatter a few chips, or even pieces of greasy hotdog, in the area and come back to check on them in 20–30 minutes. If fire ants find the 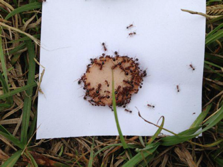 food in this time, they will find the bait. A single bait treatment applied in the spring will substantially reduce fire ant numbers. Fall treatments help reduce the number of mounds present the following spring. For more information contact our office at 919-775-5624.