Find this article at:
go.ncsu.edu/readext?500514
— Written By Minda Daughtry and last updated by Rhonda Gaster

Almost any type of plant can be grown in a container. Generally, the bigger the pot and the plant, the easier it is to care for. Soft, fleshy, leafy plants such as tomatoes and fuchsias are more demanding than ‘leathery’ plants such as pelargoniums (tender geraniums) or lavender.

In winter, the main danger for outdoor container plantings is potting soil freezing, which may kill plants. 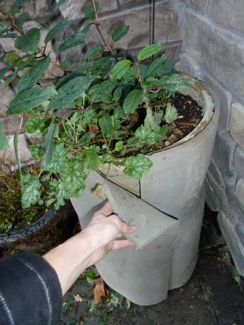 Think frost protection. Protect pots with bubble plastic or bring them under temporary cover. In very wet periods move plants under temporary cover if the potting soil becomes soaked, until it has dried out a little. Walls have the potential to retain heat well, especially if they are made of brick or stone. There are plenty of plants that will benefit from the ‘rain shadow’ conditions of being next to a wall. In wet weather, raise pots up off the ground on ‘feet’ or similar pieces to keep the bottom of the pot out of the water. Make sure to remove saucers in winter to eliminate standing water that will freeze.

Watering may still be necessary for conifers and other evergreens, especially if you have moved them under cover, where they receive no rain. Check evergreens and conifers at least weekly and water if needed. The top 2-2 1/2 inches of soil should be moist to provide enough hydration to the plant root systems as they supply the still-active evergreen plant leaves. Watering is seldom necessary for deciduous or other dormant plants. Overwatering is the most common cause of loss of container plants. Watering should aim to keep the soil moist, never soggy and avoid alternating the extremes of dryness and saturation.

Feeding is not necessary during the winter months, as we are primarily interested in maintenance and not growth.

In addition to watering concerns, plants grown in containers suffer from many of the same pests and diseases as when grown in beds and borders, such as aphids, algae, liverworts and moss and scale insects. Vine weevil and fungus gnats are particularly common pests of container-grown plants.

Over-potting is another common cause of problems. Over-potting is a term used to describe a plant in a container that has been potted into too large a container and is suffering as a consequence. In the short term after potting up, your plant is most likely going to look fine.

However, after a few weeks or months, some signs that the plant is not happy can begin to show. Watch for; Leaf yellowing, leaf browning, leaf fall, wilting, stunted growth, bronzing on evergreen such as boxwoods and yew, or soggy soil mix on the surface of the pot.

The reason the plant is showing signs of stress is because the over-large volume of new potting mix that was added when it was potted up is sitting wet for a long period, reducing aeration around the roots. Instead of the roots growing out into the new potting mix, they can just rot.

Although the potting soil will dry naturally through evaporation, it takes longer when there is a greater proportion of potting soil to absorbing roots. The fresher the soil mix, the more it will stay wet, creating a soggy ring around the root ball. Finer growing medias that hold onto more water are particularly prone to creating “soggy bottoms”.

Plants that show some of these symptoms are often mistakenly watered more not less, thus adding to the problem. If the over-potting was done late in the growing season (after June), this can just add to the problem of slow plant growth and wetter conditions.

Would you like more information on gardening sent right to your “inbox”? Contact N.C. Cooperative Extension –Lee County at 919-775-5624 or minda_daughtry@ncsu.edu and sign up for the Lee Home Hort listserve.