Find this article at:
go.ncsu.edu/readext?487644
— Written By Minda Daughtry and last updated by Rhonda Gaster

The Argentine ant is one of the more bothersome ants in our area. They are mainly a nuisance to people because they are often found indoors, forming wide, noticeable lines or trails of ants into homes. These pests have become more of a problem as natural and agricultural habitats are cleared for urban development. Argentine ants are one of several home-invading ants collectively known as “sugar ants” because they readily feed on sugary foods, in addition to some other fare.

Argentine ants do not sting. The activity of these ants incites homeowners and businesses to apply pest control themselves or hire commercial pest control companies to deal with them. Chemical insecticides, alone, without a multi-pronged management strategy often come up short of long term success. Foraging workers will frequently move indoors in search of food, in response to drought or flooding and they avoid the cold winters by inhabiting heated buildings or by collecting in warm areas such as compost piles. They feed on sweets or fruit and will use sugar-rich honeydew from certain insects, such as aphids, mealybugs, soft scales, whiteflies and leaf hoppers. Indoors they may also feed on grease-containing foods.

Argentine ants are 2-3 mm in length and black to brown in color – all about the same size, as compared to fire ants, where workers can be different sizes. Colonies are large and can contain many queens. The workers release a faint musty odor when crushed.

Argentine ants are difficult to control because all ants go through complete metamorphosis, having an egg, larval, pupal, and adult stage. Foraging adult ants are only a small percentage of the total colony, so broadcast spraying insecticide around the edge of the house affects only the foraging adult ants in the colony. Control will only be temporary since the colony will simply send out more foraging ants when others are killed.

The colony supports many queens if ant populations are large. If a broadcast spray around the house is the primary method of control, the ant workers and queens will scatter. When the ant groups separate into large enough groups, 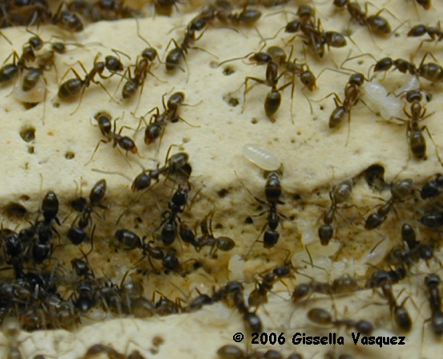 new colonies can be formed, which will then grow again. So, broadcast spraying alone can actually make your problem even worse. Unlike some ant species, Argentine ants from different colonies do not fight. Therefore, their sociable nature helps increase the population. Everyone likes a party, especially if it’s at your house.

A broadcast spray may temporarily alleviate an Argentine ant infestation, but there is a good possibility that the ants will simply move to another area until the chemical breaks down. After the chemical breaks down, the ants will return because they are constantly scouting and foraging for food, water, and nesting sites. Heavy mulch against the walls of houses creates pockets of moisture that these ants need. If these items are available to them at your house, then that’s where they’re headed. The number of ants in large colonies is almost inestimable. Also, check your potted plants by watering very thoroughly before you move them inside. They are a favorite nesting site and can bring these unwanted guests right inside to start an indoor infestation.

This is why an Integrated Pest Management (IPM) approach is your best chance for control of the Argentine ant. You won’t be able to “spray away the problem” if your site continues to offer food, water and a conducive place to make offspring. An IPM approach integrates all available control methods into a pest management program. Methods include identification, inspection, sanitation, exclusion, and chemical strategies.

Always “know before you go”. Make sure you properly identify the ant pest. Different ants have different food preferences and different behaviors that will directly impact the efficiency of control measures. Backtrack the source of the ants. Place bait or granules where the ants are foraging or nesting. Argentine ant trails will be noticeable as ants recruit to the food source. Clean up anywhere the ants have been so their pheromone guide trails will lead to your bait and no where else. In general, treatments are more effective if they are placed where ants are found. Remove excess leaf litter, decomposing wood, yard debris, and other material along the perimeter of a building that provide a safe haven and can serve as ant nesting sites. Eliminate leaky faucets, plumbing, free-standing water and food (including dead insects) because these ants are scavengers.

Caulk cracks and crevices in the house and keep branches from coming in contact with your house because ants will walk on them into the house. For chemical control options, apply chemicals carefully and always read and follow the label directions. The label is the law. Precision spot treatments around window sills and door thresholds may be effective. Insecticides are often repellent to ants and they will not feed on a bait that is placed near insecticide applications. For more information regarding control of the Argentine ants, contact your local extension office.